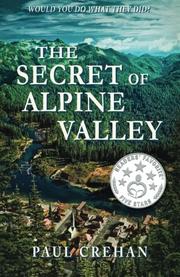 THE SECRET OF ALPINE VALLEY

Determined to save their small mill town from disaster, the resolute residents of Alpine Valley set a clever ruse into motion in veteran television writer Crehan’s debut novel.

Norman Rockwell couldn’t have painted a better setting than Alpine Valley, population 581, elevation 8,467 feet. Superficially, everything looks idyllic in this quaint Pacific Northwest mill town. Scratch the veneer, however, and a more somber situation is revealed: The closure of the local mill has led to an erosion of the tax base, and the town’s debts are running dangerously high. Nobody understands the severity of the situation better than local realtor and mother of two Annie LaPeer, who’s also the town’s mayor. Forced to figure out a way out of the morass, she and the town’s residents decide to fall back on legend. If the Loch Ness Monster and Bigfoot can still attract enthusiastic gawkers, they reason, why not resuscitate the story of the Alpine Valley Ape? Sure, nobody in recent memory has seen the monster, but everybody knows somebody who swears he has. Soon people in town create a masterful video, apparently showing the primate in action. It goes viral, and the town gets just what it wants: an avalanche of tourists and their dollars. Unfortunately, the situation also brings fresh complications, which the denizens of Alpine Valley must now solve. Crehan ably uses his clear, well-defined characters to present various moral arguments in this promising young-adult mystery. Although the townsfolk occasionally veer into caricature, they add plenty of color to the proceedings. Most of the story is told in the first person by Annie’s daughter, Melissa LaPeer, and she often threatens to derail the plotline with constant attention-getting devices: “This is a particularly important chapter because particularly important things happen in it, and I’m a little fearful that I won’t be able to get these things across to you as well as I really must.” Whimsical at first, these asides become annoying after a while, and a less self-indulgent voice might have better served the novel’s purpose. The plot also slows down halfway through before finally roaring back into action.

Readers who like quaint Lake Wobegon–esque narratives will enjoy rooting for the residents of Alpine Valley as they valiantly struggle to hang on to a fast-fading way of life.