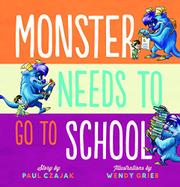 MONSTER NEEDS TO GO TO SCHOOL

From the Monster & Me series

The big blue beast, resembling one of Sendak’s Wild Things, is a quivering mess at the thought of school, but he quickly settles in and begins to learn and enjoy himself—until he observes his classmates bullying another kid, that is. “He made some friends at recess, who invited him to play. / But when he saw them teasing, he spoke up without delay. / ‘I know we’re friends, but teasing’s wrong. / It’s something I despise, / No one should be ridiculed. There is no compromise.’ ” At these words, his new friends change their ways. Readers may point out that it’s easy for a big blue monster to stand up to bullies but harder for regular kids, but the fact that Monster has feelings just like them will go a long way to making this credible, and Czajak spells it out when he writes “The teasing stopped when Monster / said he wouldn’t go along.” Grieb’s digital artwork plays up Monster’s size and expressions, and the class is diverse. Young readers may need their own educations to tackle some of the vocabulary here—“motivation,” “pursue,” “monumental”—and the rhyming text sometimes stumbles. Still, Monster’s message is an important one, and his boy has a valuable point: “It’s hard to deal with bullies, even harder / when they’re friends.”

A rhyming bullying tale with some worthwhile lessons.