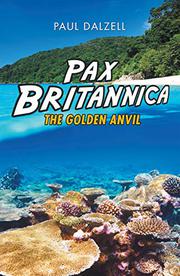 In this alternate-history thriller, an unknown organization threatens the British Empire by stealing and ransoming its atomic bombs.

It’s 2006, and the British Empire has a monopoly on nuclear weaponry. Other countries are working at developing similar devices, but the empire’s biggest threat is more immediate. Someone has stolen five British atomic bombs and sent King James V a ransom note. The letter demands 10 billion pounds and claims that any effort to recover the bombs will result in detonations on British soil. It’s signed by “Raptor,” which British authorities assume is a terrorist group. The Imperial Secret Service calls on agent Mick Doyle for assistance. Unfortunately, Raptor is already targeting Doyle and other ISS agents for assassination. These attempts ultimately generate a lead—specifically, a link to a German-owned gold mine on Lihir Island, off the British territory of Papua New Guinea. Doyle and new field agent Alexandra McCall make their way to the isle, which has its share of natural dangers, including sharks and crocodiles. Although the ISS suspects mining director and German national Gustave Jäger of terrorist involvement, there’s a possibility that the Chinese government is in on it as well. Doyle, McCall, and a few allies strive to identify Raptor and/or locate the bombs before the ransom deadline. Dalzell’s (co-author: The Friends of Eddy Relish, 2019, etc.) thriller proceeds at a decidedly unhurried pace. For example, Doyle has encounters with Lihir Island’s crocodiles before he even gets to the gold mine, which essentially sidelines the primary mission. On the plus side, the slower clip allows readers to spend more time with the lively characters. Island local Nellie, for example, who helps nurse a wounded Doyle, also knows Morse code and proves to be formidable in combat. Likewise, the inevitable romance between Doyle and McCall isn’t merely window dressing, as Doyle, who’s in his mid-40s, contemplates giving up singlehood. The final act steps up the action, leading to an ending that hints at a potential sequel.

A slow-going but absorbing spy tale with a vibrant setting and characters.