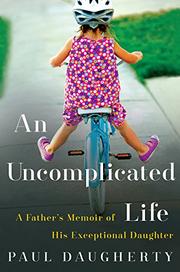 A Father's Memoir of His Exceptional Daughter

A memoir of life with a Down syndrome child.

Having a child with Down syndrome was not what Cincinnati Enquirer sports columnist Daugherty (Fair Game, 1999, etc.) and his wife expected when Kerry went into labor. But they were determined not to let their daughter's condition change the way they treated her; they would address her special needs and yet not coddle her to the point of neediness. And they quickly learned that their daughter did not want to be coddled, either. Covering the time of her birth and into adulthood, the author brings readers the highlights of Jillian's life and the truths he discovered about being a father of a special needs child, as well as about himself and the childhood that shaped him to be the man he is today. Small moments, like teaching Jillian to ride a bike, became bigger moments of letting go, both physically and mentally, which have allowed Jillian to live her life to the best of her ability. Through little scenarios, Daugherty introduces readers to the numerous people who have helped Jillian along her path: the therapist who helped her speech by teaching her how to use pronouns correctly; the teacher who realized Jillian was an individual, not just a special needs kid; Jillian's brother, Kelly, who always made sure Jillian knew she was loved; and many others. "Having a child with a disability is like having a life coach you didn't ask for,” writes the author. “You realize that perspective is a blessing that's available to anyone who seeks it. Or had it forced upon him." Through Jillian’s story, readers witness the wonder of a father deeply devoted to his daughter and who says, "I just love my life."

An expressive, nostalgic series of memories of living life with a special needs child.