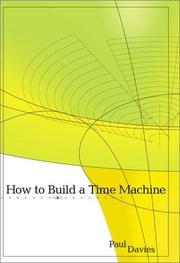 HOW TO BUILD A TIME MACHINE

Best to bring a willing suspension of disbelief to this romp by Australian physicist and prolific science popularizer Davies (The Fifth Miracle, 1999, etc.).

Build a time machine? Sure, but first you have to construct a wormhole. And not just any wormhole, but an hourglass-shaped one with a neck wide enough to accommodate human girth and without gravity-crushing forces. (After all, you want to survive the trip.) And while you can travel into the future you can only go backward in time as far as the date the wormhole was built—no ecotourism in the dinosaur age, please. How-to? What you need is: (1) a collider of such magnetic megastrength that you can implode a quark-gluon bubble and create a teensy wormhole to warp spacetime; (2) an inflator to enlarge the hole (the trick here is to inject negative energy in the form of anti-gravity matter, maybe using a laser to “squeeze” light); and (3) a differentiator to create a time difference between entry and exit holes (one way is to use the twins paradox well known from relativity theory, then again apply the inflator to produce a human-accommodating wormhole). Of course, all this bizarreness is foil for Davies to wax eloquent on concepts he has covered in earlier works: general relativity, quantum mechanics, black holes, virtual matter (non-empty vacuums), parallel universes, as well as assorted time paradoxes. Here, he displays his usual glibness in a format gussied up with simple drawings and outline portrait sketches of the greats from Newton to Hawking. Indeed, one suspects a bit of not-so-cosmic book-inflation here. And there’s a disclaimer. On the one hand, Davies proclaims that, yes, all this is theoretically possible; on the other, he alludes to a theory called chronology protection in which all of the above is taboo.

Davies Lite, with much sleight of hand.