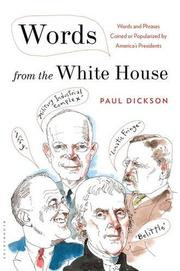 WORDS FROM THE WHITE HOUSE

Words and Phrases Coined or Popularized by America's Presidents

Dickson (Drunk: The Definitive Drinker’s Dictionary, 2009), a lexicographer and noted language expert, amusingly presents administrations who minted new ways of political expression; their range is variable, and corresponding histories evoke the best (and arguably the worst) of their time on Pennsylvania Avenue. Though Thomas Jefferson has become the darling linguist of the Oxford English Dictionary, it’s Theodore Roosevelt whom Dickson considers the grandest of the presidential neologists through a sequence of expressive offerings like “loose cannon,” “lunatic fringe,” “bully pulpit” and “muckraker.” Though not created by him, George W. Bush’s use of terminology like “axis of evil” was nonetheless effective, as was Ronald Reagan’s “Reaganomics.” Abraham Lincoln’s creative demonyms (“Michigander”) pale in comparison to the heft of the word “sockdolager” (“a decisive blow”), which was one of the last things heard before his assassination. A boon for history buffs, the author’s insightful section on Franklin D. Roosevelt’s “new deal” and James Polk’s “manifest destiny” are prime reminders of many presidents’ dedication to their esteemed posts. Still, the JFK portmanteau word “moondoggle” laughingly mocked a well-intentioned space program, and George W. Bush’s “misunderestimate” malapropism went on to become prime media fodder.

A compendious, entertaining look at our nation’s leaders through words and turns of phrase.