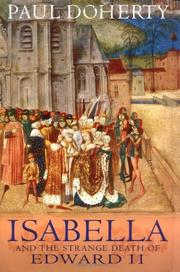 ISABELLA AND THE STRANGE DEATH OF EDWARD II

A lively reconstruction of events in medieval English history, full of all the good stuff: murder, adultery, treason, and a few beheadings.

Isabella, the daughter of French king Philip Le Bel and Johanna of Navarre, is a minor figure in world history, all things considered; Mel Gibson’s 1995 film Braveheart gives her a far more important role in the unpleasantness between England and Scotland of the late-13th and early-14th centuries than the facts warrant, especially by supposing that the Scottish leader William Wallace was the father of her child, who would become Edward III. For all that, Isabella did chalk up some significant deeds, not least of which, writes English mystery author and historian Doherty (The Mysterious Death of Tutankhamun, 2002, etc.), was that “she brought about the first formal deposition of an English king, even though it was for her own selfish motives.” That king was Edward II, son of Edward Longshanks, who emerges in Doherty’s account as a feckless but not altogether bad fellow; his downfall came not through his homosexual dallying, as Braveheart hints, but through his overall lack of interest in running an empire, a job Isabella was only too happy to take on in the name of her son, fathered not by Edward but by the English exile Roger Mortimer. The existence of both heir and bedroom rival meant, of course, that Edward II had to be done away with, and Isabella engineered a nicely gruesome end for him. Confused yet? Well, the times were plenty confusing—they could hardly be otherwise in a milieu when royal spymasters wrote to the Pope to ask for blessings against spells cast by rival magicians, and when the death of a child in Norway could set about a struggle over monastic succession in France. Doherty deftly keeps the players and the facts lined up, delivering an entertaining tale as well.

A satisfying excursion for medieval-history buffs.