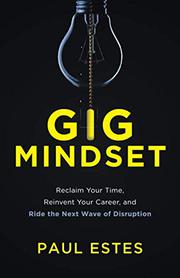 Reclaim Your Time, Reinvent Your Career, and Ride the Next Wave of Disruption

A veteran of big tech extols the virtues of the gig economy.

Estes, who held a senior position at Microsoft, uses this lively debut as a soapbox for a kind of career–personal life equilibrium he says can be achieved through adopting a “Gig Mindset.” If the gig economy is “fundamentally changing the world of work,” then the Gig Mindset “changes the way we work forever,” writes the author, who advocates employing “on-demand experts to reclaim our time.” Estes discovered the value of relying on talented freelance professionals to get things done, and it revolutionized his life. He cleverly developed a process to take full advantage of the gig economy that he calls “The T.I.D.E. Model: Taskify, Identify, Delegate, and Evolve.” Using engaging, motivational text supplemented by examples primarily from his own experience, the author walks readers through these four elements in detail. Of great interest are the excerpts of interviews he conducted with a panel of five senior executives, each of whom provides commentary that enriches and shapes the Gig Mindset conversation. T.I.D.E. itself is an intriguing concept; still, each of the four elements has intrinsic value that applies to business management in general. For example, Estes discusses a concept he calls “radical delegation,” which involves setting expectations, developing timelines, and trusting others to execute tasks. He offers seven specific steps he recommends for practicing effective delegation. Regarding the need to think differently, GE executive Dyan Finkhousen tells Estes: “The truth is that engaging with gig resources required an evolution of our own mindsets and behaviors.” The author wraps up the book with some key observations by his panelists and himself about negative perceptions surrounding the gig economy. Tucker Max, bestselling author and co-founder of a publishing service called Scribe Media, says about the myth implying freelancers are subpar: “That people are freelance because they can’t get a full-time job. It’s nonsense….In fact, we find overall the freelance pool to be far higher talent than the people applying” for full-time jobs. Two appendices—gig-related tasks for business and home—are useful additions.

Illuminating and forward-thinking; demonstrates how to leverage gig workers for time-saving life tasks.