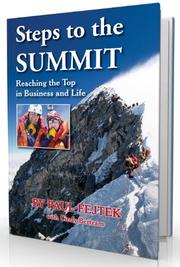 STEPS TO THE SUMMIT

Reaching the Top in Business and Life

Mountain climber, investment banker and entrepreneur Fejtek, born with a condition that resulted in a partial paralysis of his right arm, writes of his quest to conquer the highest mountain on each continent.

With his wife and climbing partner, Denise, Fejtek spent eight years on a quest to reach the summit of seven of the world’s highest peaks and bring attention to athletes with physical disabilities. Starting with Mt. Kilimanjaro in Tanzania and ending with Mt. Everest on the border between Nepal and Tibet, the Fejteks overcame physical disability, brutal weather, life-threatening avalanches and illness to accomplish a feat only 65 other people at that time had achieved. Along the way, the author realized that the steps he took to prepare himself had relevance in his everyday life and business experience. Fejtek’s story is cleverly and succinctly told in 15 steps that encompass his philosophy for finding success in life and in particular as a businessman and athlete. Fejtek not only uses his steps to carry him over the finish line in Ironman competitions but also in business transactions. As he points out, steps such as “Have a Little Faith,” “Move Fast,” “Just Breathe” and “Never Give Up” can be applied to many large and small challenges. The author demonstrates most of these steps in his story of climbing Mt. Everest, an endeavor that has claimed the lives of hundreds of well-prepared climbers. The mountaintop was elusive, but the Fejteks made it to the top of the world; they also brought 23 of their friends to Everest’s base camp (at an altitude of more than 17,000 feet) in a project called Everybody to Everest. The project helped raised money for the Challenged Athletes Foundation, a group whose members were instrumental in inspiring and helping Fejtek achieve his lofty goal. (All the profits from the sales of this book will go to the CAF.)

An inspirational book about how to achieve one’s goals, wrapped in an adventure tale.