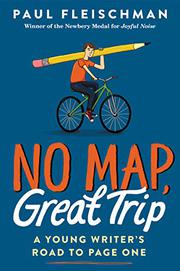 A Young Writer’s Road to Page One

The Newbery medalist offers a combination memoir and guide for aspiring writers.

As a young boy in 1962, Paul Fleischman, son of children’s author Sid Fleischman, is introduced to a larger world of storytelling with his shortwave radio. Listening to broadcasts from around the world opens him up to cultures beyond white suburban Santa Monica. As part of his father’s research for a book, the family purchases a printing press to be assembled at home, an experience that is an early influence on Paul’s road to becoming an author himself. One of his first experiments as a writer is an outlandish, rogue newspaper he and his fellow classmates produce and distribute under the radar of high school administrators. High school is followed by a spell of wanderlust, including a short stint at UC Berkeley and a bike ride up the West Coast to Vancouver that capriciously lands him first in New England and ultimately in Albuquerque. Vignettes with writing advice, sometimes only tangentially connected to the adjoining chapters, appear sporadically and jar the narrative. Fleischman’s story reads as a remarkably engaging memoir but less successfully as a writing tutorial. At times, cultural references may be lost on younger readers, such as roller derby, Shirley Temple, and Marxism, and they may wish for more context.

Overall, a humorous, thoughtful demonstration that the path to writing isn’t always a straight line.