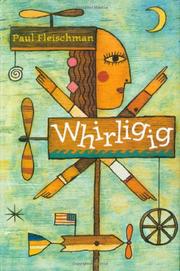 At once serious and playful, this tale of a teenager’s penitential journey to four corners of the country can be read on several levels. While attempting to kill himself on the highway after a humiliating social failure, Brent causes a fatal accident for another motorist, Lea Zamora. His sentence requires a personal act of atonement, if the victim’s family so desires; Lea’s mother hands him a bus pass and tells him to place pictorial whirligigs in Maine, Florida, Washington, and California as monuments to her daughter’s ability to make people smile. Brent sets out willingly, armed with plywood, new tools, and an old construction manual. Characteristically of Fleischman (Seedfolks, 1997, etc.), the narrative structure is unconventional: Among the chapters in which Brent constructs and places the contraptions are independent short stories that feature the whirligigs, playing significant roles in the lives of others. Brent encounters a variety of travelers and new thoughts on the road, and by the end has lost much of the sense of isolation that made his earlier aspirations to be one of the in-crowd so important. The economy of language and sustained intensity of feeling are as strongly reminiscent of Cynthia Rylant’s Missing May (1992) as are the wind toys and, at least in part, the theme, but Fleischman’s cast and mood are more varied, sometimes even comic, and it’s Brent’s long physical journey, paralleled by his inner one, that teaches him to look at the world and himself with new eyes. (Fiction. 12-14)