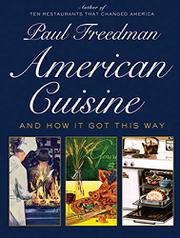 And How It Got This Way

A celebration of American diversity as seen through its food.

Freedman (History/Yale Univ.; Ten Restaurants That Changed America, 2016, etc.) offers a sweeping, thoroughly researched social and cultural history of America through its changing food habits and practices, from the nation’s founding to the current trend of farm-to-table cuisine. Drawing on cookbooks, culinary histories, advertisements, restaurant menus and reviews, guidebooks, and chef’s memoirs, the author argues convincingly that Americans do have “well-defined and consistent tastes” in food: a “national fondness for sweet, spicy, and salty combinations” and enthusiasm both for regional traditions and for variety. In examining culinary delights from different regions, Freedman points out that “invented traditions infuse regional cuisines, just about everywhere and many ‘traditional’ foods are not as old as most people believe.” If grits and barbecue are unknown in some parts of the South, still, roadside restaurants and cookbooks long have featured dishes—stewed clams from North Carolina and cranberry chiffon pie from Georgia, for example—that evoke particular areas. Variety, though, has been compromised by the rise of agribusiness and supermarkets. Freedman notes that in 1905, 14,000 varieties of apples were grown in the U.S.; by the 1960s, only three were sold in supermarkets. By the end of World War II, processed foods came to be less expensive than fresh ingredients and tempted homemakers with more time for “work, family, and active leisure.” For many decades, consumers accepted processing and lack of diversity as trade-offs for the advantages of “hygienic safety, consistency, [and] affordability.” The author locates the movement against homogenization and standardization in the 1970s, which also saw a decline of French haute cuisine as the ultimate tastemaker. “All the pieces of New American cuisine—farm-to-table, seasonal, and local—were in place by the end of the 1980s,” he writes. Freedman also offers entertaining profiles of many notable chefs, including Alice Waters, Thomas Keller, and René Redzepi, whose influences have reformed how many Americans eat.