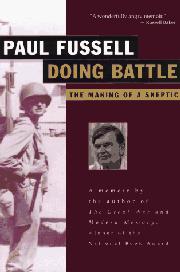 From literary historian Fussell (The Angi-Egotist, 1994; Wartime 1989; etc.), a lugubrious, frequently self-pitying account, relieved by flashes of wit, of how he evolved from a happy-go-lucky Southern California innocent into the vinegary cynic and intellectual snob he is now. Born in 1924, Fussell lived a privileged, even idyllic boyhood in Pasadena as the son of a distinguished local attorney. His principal interests were printing, photography, and magic. His innocence was unrelieved by his years at Pomona College, where he discovered literature, particularly the works of H.L. Mencken, whose acerbic and baroque contempt for America seems to have permanently marked Fussell's outlook. Neither Pomona nor Mencken was ideal preparation for his grueling WW II induction into the army and service in Company F of the 410th Infantry, 103rd Division. Combat was even more dehumanizing; here, as elsewhere, Fussell writes graphically and with simple eloquence of the disfiguring effects of combat on the body, mind, and soul of soldiers. On March 15, 1945, Fussell was severely wounded by shrapnel from a shell that killed the two men with him, and he spent considerable time experiencing the horrors of army hospital life. Annoyingly, Fussell can't help comparing all life experiences to a book he's read or a movie he's seen; he compares his field hospital to a scene in Gone With the Wind. Mustered out, he resolved to resist falsehood and cant, and after earning his Harvard doctorate, he bravely waged war on the sensibilities of the young "girl-children" of the Connecticut College for Women, whom he routinely reduced to "tears and tantrums." He moved on to despise the students at Rutgers University, whom he calls "moronic." Fussell treats the reader to a running commentary on his books and essays, venting iconoclastic views on war, culture, and other subjects along the way. Unpleasant in many ways, but valuable, as are other of Fussell's works, for a forthright portrayal of war's horrors and lasting ill effects.