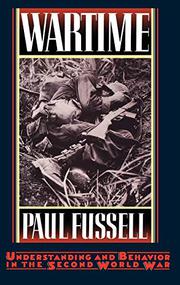 Understanding And Behavior In The Second World War

In this engaging, elegant, and enlightening study of WW II. Fussell (Class; Abroad; Samuel Johnson and the Life of Writing, etc.) continues the revelatory work he did in his National Book Award-winning The Great War and Modern Memory (1975). By turns amusing and shocking, Fussell's unforgivingly cleareyed vision takes in both official and uncensored ephemera—along with published accounts—to overturn the upbeat view of the war promulgated by both the government's publicity machine and the general media. Beginning with a discussion of our total unpreparedness and general incompetence—"precision" bombing often fell on our own troops; the RAF were in danger from their own frightened ground support—Fussell turns to the popular rumors, slang, stories, and humor of the troops. A chapter on "chickenshit" reveals loathsome small-mindedness endemic in the system; the chapter title "Drinking Far Too Much, Copulating Too Little" nicely sums up the G.I.'s preoccupations. But Fussell is at his best as he examines the forced high-mindedness of official wartime rhetoric and the growth of "Accentuate the Positive"-toned publicity as a distinctly essential facet of modern war. Finishing with a survey of wartime literature, including Cyril Connolly's Horizon magazine and the paperback publishing programs that flowered with the war, he concludes that even now "America has not yet understood what the Second World War was like. . ." Funny, upsetting, at times brilliantly illuminating.