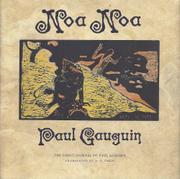 The Tahiti Journey of Paul Gauguin

Gauguin may have been guilty of buying into the myth of the ``noble savage,'' but his Romantic quest seems almost contemporary today. In his own post-Rousseau, premulticultural time, however, his Tahitian escapade was viewed less sanguinely. On his return to France, unable to find a publisher, Gauguin himself published his diary, Noa Noa, minus the accompanying woodblock illustrations. Now the journal and art are reunited in this verbal and visual ode to Tahiti. The black-and-white woodblock prints present a spare contrast to the usual wash of colors in Gauguin's paintings, but they retain the pacific sensuality that permeates his work. The color here comes from the sketches Gauguin made in the margins of his diary, and from the writing itself: ``Silence? I am learning to know the silence of a Tahitian night.... The rays of the moon play through the bamboo reeds.... Between me and the sky there was nothing except the high frail roof of pandanus leaves, where the lizards have their nests.''