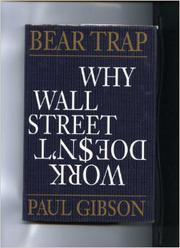 Haphazard critique much exaggerating the latter-day difficulties of the financial-services industry without addressing the implications of its ongoing—and convulsive—restructuring. Gibson (a Forbes senior editor) seems to equate Wall Street with the commercial investment banks clustered in lower Manhattan, but he turns to foreign brokerage houses, portfolio managers, mutual-fund groups, and commodities or stock exchanges when it suits his purposes. Arguing that old-line firms are in mortal danger, the author offers an audit of such problems as overcapacity, global competition, ineffectual regulation, ongoing advances in technology, resistance to change, and a willingness to incur substantive risks to collect the handsome fees or trading profits needed to offset a precipitous decline in commission dollars. In aid of his thesis, Gibson covers a lot of old ground, including Salomon's rigging of Treasury bond auctions and the delinquent bridge loans still on the books at overly venturesome securities firms. But he fails to explain what a make-over of the money game's once-clubby establishment might mean for individual and institutional investors, let alone private enterprises that need to raise debt or equity capital. In some cases, moreover, he appears not to know what he's talking about—e.g., in covering GICs Gibson refers to them as guaranteed income ``certificates'' (rather than ``contracts,'' as is proper). Nor is he always consistent: he asserts that spreads on fixed-income instruments have shrunk since Michael Bloomberg began vending detailed price data by wire; later, he quotes without disputing an analyst who concludes: ``Spreads are widening in all markets.'' Gibson goes hunting for bear—but his aim is way off the mark.