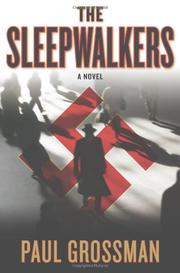 In Grossman’s debut novel, a Jewish cop in 1932 Berlin hunts the perpetrators of a grotesque crime, against a backdrop of political turmoil.

Willi Kraus, the cop famous for catching the infamous Kinderfresser child murderer some years back, is called to a riverside crime scene on the outskirts of Berlin. The body of a young woman has washed up, and she’s been mutilated—someone has expertly grafted the bones in her calves on backwards. But before the investigation into this bizarre crime can begin, Willi receives another assignment, this time from President Hindenburg. A Bulgarian princess has gone missing while visiting Berlin, "sleepwalking" (in the words of the doorman at her hotel) into the night, and Willi is to drop everything and find her. Willi decides it’s too much of a coincidence that the somnambulant princess went to see the Great Gustave’s hypnotism act at a nightclub the evening she disappeared. When Gustave’s name comes up in the case of the dead girl, and after Willi and his loyal assistant find evidence of dozens of girls sleepwalking away into the ether in recently years, Willi is convinced that Gustave is hypnotizing girls with great legs, and sending them off into the hands of some evil master orthopedic surgeon. Meanwhile, Willi has become entangled with a prostitute named Putzi, the dead girl’s roommate. In order to help avenge her friend’s death, Putzi comes up with a scheme that involves her being hypnotized by Gustave, while Willi and his gadfly journalist friend Fritz follow along. It seems foolproof. But in Berlin in 1932, nothing is certain. Stripped of its setting, this book is a fairly straightforward thriller, but surrounded by the dramatic events of the Nazi rise to power, it takes on added heft and a relentless drive.

A solid thriller set amid riveting historical events in the seedy underbelly of a city—and a world—slowly going mad.