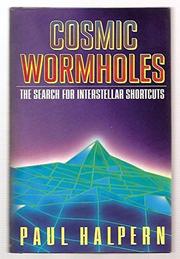 The Search for Interstellar Shortcuts

Halpern (Time Journeys, 1990) hits upon another topic compelling enough to overcome his rather deadpan style: the scientific search for black holes, white holes, and wormholes that may transport humans and objects almost instantaneously through space and time. While writing his novel Contact, Carl Sagan found himself temporarily stumped by the apparent impossibility of long-distance space travel on a reasonable time scale. In a universe in which the nearest star hovers a million years away at our own present rocket ships' rate of speed, and a circumnavigation of the Milky Way would take nearly a trillion years to complete, exploration beyond our solar system would seem to require either multigenerational clans of travelers or the deep-freezing of astronauts for centuries. Hoping for a better solution to use in his book, Sagan challenged Cal Tech physicist Kip Thorne to come up with a believable shortcut. Thorne and his graduate student, Michael Morris, responded with a theoretically feasible artificial tunnel in space, roughly resembling in both appearance and function the monolith in Arthur C. Clarke's 2001, and designed to provide ``safe and permanent passage'' between black holes billions of light years, and perhaps eons of time, apart. Thorne and Morris's work spurred sufficient scientific interest in the subject that, as Halpern writes, ``theoretically, traversable wormholes could be constructed today, given the right amount of matter in the proper configuration.'' As he points out, though, that's a major given. Unless physicists can more fully develop a quantum theory of gravitation, resolve the paradoxes associated with closed timelike loops, and learn how to harvest exotic matter from the thresholds of black holes to use in building interstellar gateways, wormhole theory may never proceed past the present ``philosophical phase.'' Nevertheless: tantalizing far-out physics, conveyed with clarity and imagination.