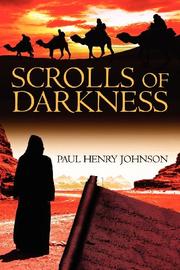 Brent Michaels must prevent the devil from unleashing hell on Earth in this thriller by Johnson.

Brent, a corporate attorney, never dreamed that he would be the key to uncovering an ancient plan of the devil’s to lure humanity into evil. But after a visit from a mysterious friend of his deceased father, Mr. Baumann, and the tragic murder of his sister, Brent embarks on a journey to avenge her death and to find and destroy the Scrolls of Darkness. Thus begins Johnson’s epic, Da Vinci Code-like thriller. As it turns out, Brent may not be as ordinary as he once thought: An ancient prophecy foretells that he’s the only one who can fulfill the covenant his ancestor made to destroy the scrolls and defeat the shadowy group known as the Sons of Darkness. Brent sets out for New Zealand to get help from beautiful, intelligent Melauni Sherwood, an archaeologist. In New Zealand, Brent plunges into the supernatural. A meeting with Lucifer himself and a visit from his sister convince him of his true calling. In a whirlwind adventure, Brent travels to Paris and Rio in search of his sister’s assassins and to Israel in hopes of using the Urim and Thummim, an ancient instrument that allows one to receive revelations from God, to find the scrolls. Despite the dire stakes of the novel, the plot meanders slowly and stints on action. Beyond Brent’s hunt for his sister’s killers, it often feels as though Johnson merely moves pieces around on a chessboard with no real purpose. Brent finally searches in earnest for the scrolls more than midway through the thriller. While the novel doesn’t break any ground when it comes to its genre, Johnson concocts a clever, shocking plot twist that leads to a satisfying, exciting conclusion that also sets up more adventures for Brent Michaels.

A slow-paced thriller that ultimately delivers.