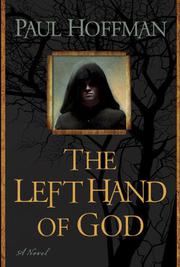 THE LEFT HAND OF GOD

The first of a medieval-fantasy trilogy from the author of The Golden Age of Censorship (2008, etc.).

At the vast, labyrinthine Sanctuary arrives a seemingly endless supply of orphan boys. Here the religious-fanatic Redeemers attempt to inculcate the boys with their faith while turning them into holy warriors. So unremittingly brutal and sadistic are their methods, however, that it’s a miracle that any survive; those that do are tough, sociopathic and accomplished liars. While exploring the Sanctuary's endless corridors, Cale and his friends Kleist and Vague Henri stumble upon a senior Redeemer carefully eviscerating a living girl, while another awaits the same fate. Appalled, the boys rescue the survivor, Riba, and flee thanks to Cale’s extraordinary talents. They arrive at Memphis, a sort of waterless Venice ruled by a clan of Italianate Teutonic knights called the Materazzi. Having no breeding or social standing whatsoever, the fugitives are treated with contempt even after Cale easily defeats Conn, the Materazzi’s finest young warrior. Eventually, after innumerable complications, for reasons that only become clear at the end, the Redeemers move against Memphis. During all this, the narrative tone switches abruptly between boyish, avuncular, pedagogic, ironic and jocular. Hoffman carefully foreshadows events that never happen, then, having overlooked necessary facts, abruptly blurts them out or digresses for several pages. The randomly assembled, pseudo-medieval backdrop is stuffed with leering modern referents. Yet despite these gaping flaws, the plight of poor, tormented, invincible Cale beguiles, and the book’s true power is its utter unpredictability.

Judging by the hype, what the publisher hoped for was Lord of Harry Potter’s Dark Materials; what it actually secured is, in its own immodest way, engrossing enough.