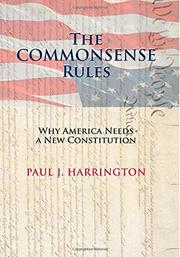 Why America Needs a New Constitution

This meticulously researched debut treatise explains where and how the United States has gone wrong and posits a new vision of the government to help fix it.

Harrington is convinced that America is going down the wrong path. Should the pattern hold, he says, the United States will default on its debt by 2021, which will be disastrous. But he also firmly believes that there are answers and that they’re achievable. What he proposes, however, is both radical and fairly shocking: to rewrite the U.S. Constitution. His book is huge in scope, covering the mindsets of the framers of the Constitution; the philosophies of Immanuel Kant and John Locke; and ideas on how health care ought to work, among other things. But no particular piece seems out of place, and overall, the book avoids an overly alarmist tone. Harrington’s legal training allows him to expediently unpack the intricacies of government language. However, his former career as a businessman shines, both in his proposed structure for the executive branch, which imagines the president as a CEO with four COOs and no veto power, and in his unmistakable hubris in singlehandedly conceiving a plan to save the nation. He does a good job of explicating jargon and terminology, but he introduces so many abbreviations—such as GDP, CBO, OMB and XXX—that a list of definitions would have been useful. The text is thoroughly annotated, and the endnotes include complete citations for all references, although there’s no separate bibliography nor are there access dates for online sources. Although the book is successfully nonpartisan, Harrington can’t quite keep himself out of the story, as evidenced by sentences such as “I would prefer to avoid such a difficult transition.” He also troublingly lapses into historical fiction when setting the scene for the signing of the Constitution.

A wide-ranging, ultimately hopeful book that has much to offer readers interested in government and politics, whether they agree with its conclusions or not.