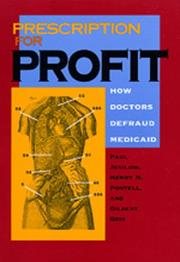 A hard-hitting, well-documented exposÇ of how physicians milk the Medicaid system. The cost of Medicaid fraud is unknown, but every year about two hundred physicians are suspended from the program because of fraudulent or abusive practices. The authors (all professors at the School of Social Ecology at the University of California, Irvine) look at these violations and examine the system that has provided the opportunity for them as well as the backgrounds of doctors who commit them. (Some of the violations are outrageous: bills for therapy while the therapist, a psychiatrist, was having sex with a patient; bills for abortions on nonpregnant women.) Medicaid's fee-for-service system makes fraud easy: By simply checking a box on a form, a doctor (or a billing clerk) can charge for services not performed. Meanwhile, ripping off the government apparently doesn't create guilt feelings: Interviews with 42 physicians reveal that these M.D.s see themselves as the innocent victims of bad laws and bureaucratic interference. And the medical fraternity has taken a relatively benign attitude toward Medicaid fraud, with state regulatory boards rarely revoking licenses of apprehended physicians. The authors offer no quick solution to the problem, noting that tension between government regulation and professional norms of behavior is growing. Finally, they look at the health-care systems of Great Britain, Canada, and Australia, to consider how they cope with fraud, concluding that the problem can be solved only through structural changes in the delivery of health-care services. Exactly what changes are necessary remains unclear. More fuel for the debate on health-care reform, filled with horror stories that can't help but add to the public's growing disillusionment with doctors.