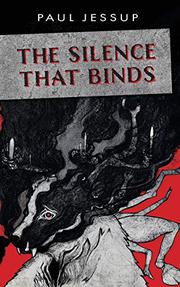 THE SILENCE THAT BINDS

In a post-apocalyptic world swept by a plague, two young women search for their missing mentor, lost in an infected landscape.

Fantasy/SF author Jessup conjures up a fever-dream, chaotic, dystopian environment that might be future Earth, distant-past Earth, or maybe another colonized planet in this novel; it is difficult to judge. Humans seem to have forgotten most of their history, terrorized and diminished as they are by the “curse,” the tag given to a grotesque plague of unknown nature that afflicts not only flesh, but also inorganic objects (entire buildings, in fact) and, possibly, reality itself. Animals and people tend to transform painfully into monstrous, destructive, multiheaded chimeras (many others seem to become zombies—though that genre buzzword is never used). Defending against the horror is a sisterhood of “seers,” female orphans who dwell in a labyrinth of bones and train in combat archery, dancing rites, and curious healing arts, communing with the world’s “ghosts.” The seers can forestall, if not completely cure, the curse, a principal method being the forcible insertion of a precious “ghost heart” (and, sometimes, a few butterflies) into a victim’s tortured body. Mazi and Talia, two young temple acolytes, have left the labyrinth in search of Naomi, a missing older seer whom they regard as a mother figure. The quest grows more desperate when Mazi, wounded, realizes she is infected by the dreaded curse. Jessup’s prose sometimes recalls Harlan Ellison at his most extravagant, invoking a lurid, elastic environment steeped in ritual yet with delirious magic as well as weird science. A space-based artificial intelligence called the Dzall figures into the equation, and some characters and entities may be robots, androids, or nanotechnology creations. Expect no firm answers or solid exposition by the time the narrative arc (a rather simple one, when all is said and done) reaches its cathartic conclusion. Just go with the vivid flow of descriptions of entropic desolation and phantasmagoric filigree: “The hollow stones were a mess of geometry on the side of the hill. Trees seemed to back away from them, and the air smelled like pine and earth and fungal things spreading out underground.”

A striking tale of violence and redemption with an abundance of mysterious dream/nightmare imagery.