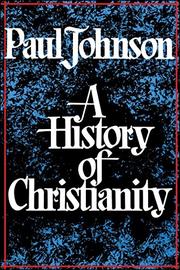 A first-rate history of Christianity from its emergence into a chaotic world ripe for universal monotheism to the nadir of triumphalism in the 20th century. Paul Johnson, an English publisher, biographer, and historian, has perceived in the current waning of Christendom an opportunity for a comprehensive one-volume retrospective, presenting the salient facts as modern scholars see and interpret them. Though the narrative is fast-paced and the style vigorously economic, the account brims with telling details and reasoned judgments and never seems superficial, Johnson eschews all special theological pleading and abides by professional canons of evidence and objectivity. Drawing on a wealth of primary and secondary sources, he maintains a healthy balance between the internal and external dimensions of Christianity's development; events and ideas mesh into a coherent story. He analyzes the vicissitudes of growth and adaptation with tough realism; in fact, he accents the conflicts, shortcomings, and institutional distortions and thereby effectively counters the homogenized interpretations of much orthodox church history. Though scholars can cavil at points of detail, Johnson's book is a bold achievement of compression and analysis.