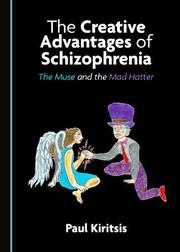 THE CREATIVE ADVANTAGES OF SCHIZOPHRENIA

The Muse and the Mad Hatter

As debut author Kiritsis observes, creativity has long been associated with “divine madness” and the inspired artist with tortured insanity. He aims to make the case that there is, in fact, a “connection between the schizospectrum, bipolar, and substance abuse disorders and creativity.” More specifically, the author investigates the possibility that psychosis and creativity “share polygenetic roots” and that “the inner mental processes experienced as delusional beliefs and hallucinations by the inwardly disordered may also be the fountainhead and raw underpinning of creative thought.” Kiritsis focuses on positive schizotypy, which characterizes “highly imaginative” and “internally preoccupied” people who tend to hold beliefs about the world that are unconventionally drawn to the mystical and supernatural. The author furnishes a rigorously synoptic history of schizophrenia and its treatment, including an edifying discussion of the modern tendency to overinterpret it as a “brain disease” and handle it accordingly by pharmaceutical means. He raises provocative questions about the peculiar evolutionary resilience of schizophrenia, which, he argues, suggests that creativity is among its “compensatory advantages.” As Kiritsis points out, his study has “profound clinical and social implications,” not just for the understanding of psychopathology and its treatment, but also as a potential means to disabuse the “profusion of ignorance around mental illness” so common today. Furthermore, the work also points the way to a less idolatrous embrace of “the hegemony of the Western-mind sciences,” which, as a consequence of an unbridled materialism, immediately classifies spiritual experiences as aberrant hallucinations. The book is brimming with haunting images by debut illustrator Christos Stamboulakis, the author’s cousin, and others, many of which depict the struggle with psychosis. Kiritsis’ study is painstakingly argued—he furnishes a model of experimental meticulousness. In addition, the analysis is not just scientifically exacting, but reasonable as well—he draws on both his work as a “burgeoning clinician” and his experiences as an “untutored eyewitness.” The subject matter is drawn from Kiritsis’ doctoral dissertation and often reads precisely like that: long, crashing sentences brimming with gratuitously technical jargon turbidly conveyed. But beneath the topsoil of academic-speak, there is a genuinely intriguing exploration of creativity.

Despite some dense prose, this work offers a stimulating investigation into an important scientific topic.