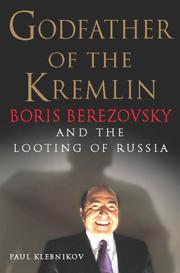 GODFATHER OF THE KREMLIN

Boris Berezovsky and the Looting of Russia

A minutely detailed and shockingly informed account of the looting of Russia by oligarchs, thugs, and crony capitalists during the Yeltsin era.

Klebnikov, a senior editor at Forbes and the magazine’s Russia correspondent since 1989, traces Russia’s decade-long transition from a promising emerging democracy to an impoverished and corrupt kleptocracy. Based on extensive (and remarkably frank) taped interviews with key figures in government, organized-crime, and business, Klebnikov convincingly argues that organized crime figures, posing as legitimate businessmen, have controlled much of Russia’s recent history, siphoning off the country’s resources, dictating the Yeltsin administration’s policies, and instigating two wars in Chechnya. At the heart of many of these schemes has been Boris Berezovsky, a “businessman” who built an obscure auto dealership, Logovaz, into an empire that eventually included the nation’s most prominent television station, its largest automobile maker, the national airline, and enormous banking, mining, and oil concerns. Strangely enough, despite the title, this is not really about Berezovsky; he appears simply as the most prominent of the many shady figures vying for power in Moscow. More than a biography, this is a new version of the old Cold War Kremlinographies—but with oligarchs doing the scheming instead of members of the Politburo. The lack of focus on Berezovsky has a downside, however: in the absence of an organizing narrative principle the work occasionally slips into a scatter-shot recounting of various mafiosos and their malevolencies. At some points you can almost see the joints between the index cards on which Klebnikov must have taken his extremely careful notes.

While not a literary masterpiece, though, this is an important, not to mention a very brave, work. It should lay to rest any remaining Western doubts about the extent to which Russia’s supposed “transition” to capitalism and democracy during the Yeltsin years was actually a devolution into violence and corruption, led by unscrupulous and probably criminal businessmen like ’Berezovsky.