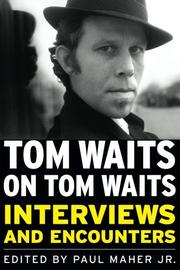 The singer-songwriter-actor-playwright with a rare gift of gab gets a second anthology of interviews.

Given the richness of Tom Waits’ nearly 40-year career and his unique gifts as a word-drunk raconteur, a compilation of old interviews with the musician is a natural. In fact, editor Maher (Jack Kerouac’s American Journey, 2007, etc.) has been beaten to the punch by Mac Montandon’s Innocent When You Dream: The Tom Waits Reader (2005), which brought together many of the best pieces on Waits from top-flight periodicals. This book contains lesser stuff. Maher admits in his introduction that he couldn’t afford to pay the permission fees for stories from higher-profile magazines. Thus, his compilation leans on B-team writers and work from sometimes obscure (and often now-defunct) music rags and alternative weeklies. Organized by album-release cycle, Maher’s anthology attains a repetitive rhythm in the early going, which recounts the performer’s 1970s development as the jazzy beat/boho poet laureate of the American underside; the narrative shifts gears after Waits’ 1980 marriage to Kathleen Brennan, who became his writing collaborator and helped steer his music into riskier, more cacophonous realms. The package is messily edited, with flat-footed interstitial material. Writers’ expositions of the vocalist’s life and career, and some of Waits’ gags, incessantly duplicate one another. British journalists—including Sylvie Simmons, Mick Brown, Pete Silverton—seem to fare best with Waits. Interestingly, some of the most revealing American interviews are with radio hosts: L.A. folk DJs Roz and Howard Larman and Philadelphia veteran Michael Tearson. But many of the interrogators are unable to hit their subject’s obfuscating curve balls. Some, like Spin magazine’s insufferable Bart Bull, flash plenty of sub–Lester Bangs style to zero effect. The least of the material is perplexingly culled from press kits for record and movie projects. Though always entertaining, Waits conceals more than he exposes; as he notes to Amanda Petrusich in the book’s most telling quote, “The fact is most of the things that people know about me are made up. My own life is backstage.” Some entertaining yarns lurk among a great deal of garrulous dross.