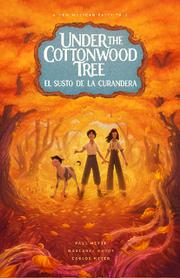 UNDER THE COTTONWOOD TREE

by Paul Meyer and Carlos Meyer , illustrated by Margaret Hardy

A debut graphic novel focuses on a zany family adventure in the American Southwest.

The Meyer brothers take readers to New Mexico in 1949. A mischievous boy named Carlos Lucero loves teasing a local elderly woman. But the woman is not just an average citizen: She is a curandera, or healer. Carlos sees her as an old witch, and he manages to snatch a cookie known as a bizcochito from her home. After Carlos takes a bite of the treat, he is swiftly turned into a calf. Amadeo, the victim’s older brother, and his friend Monree need to figure out how to turn Carlos back into a boy. The first idea is to go to Monree’s grandfather. The man is a shaman, but, unfortunately, he is currently out of town helping a grandson on a vision quest. To make matters worse, the boys realize that the curandera is following them, and she doesn’t seem happy. Her ability to change into different animals only frightens the duo more. The boys make their way back to the Lucero home, where more of the family becomes involved. But how will they manage to save Carlos and battle a woman skilled in magic? Even if it seems unlikely that Carlos will remain a calf forever, the journey to his redemption is full of twists, comedy, and sprinklings of Spanish. The authors provide a helpful glossary at the end that translates the Spanish words like “abuelo” (grandfather) and “cueva” (cave). And the tale’s humor, much like many of the earthy colors used by debut illustrator Hardy throughout the book, comes through strongly. For instance, a large talking rat named José with a fondness for beer, cheese, and dancing tends to steal all the scenes he appears in. In addition, whenever people become creatures, they retain something of their human looks (José has a mustache), and the results are cute and amusing. By contrast, more serious portions can languish. The curandera is given a backstory to explain her cruelness. She mourns a tragic event in her past yet her method of coping seems a little hard to believe even by quirky villain standards. Nevertheless, the narrative never drags and offers plenty of action. There are chases, monsters, and episodes of family bonding galore. There is even room in the end for some sentimentality.

A fantastical and satisfying romp near the Rio Grande.