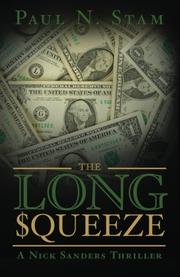 From the A Nick Sanders Thriller series

A forensics accountant and former fed looking into the death of an FBI pal may have exposed an imminent terrorist attack in the second in Stam’s (The Trust Company, 2012) thriller series.

When venture fund Phoenix Holdings loses three employees, including undercover fed Chuck Engler, in an unexplained plane crash, the FBI calls in Nick Sanders as a consultant. Nick, who’d previously worked in the bureau’s financial crimes unit, joins his girlfriend, Special Agent Lisa Velasquez, in investigating his friend’s involvement in Phoenix. The two initially suspect that Chuck had been on the take, but the agent’s posthumous message for Nick—“follow the money”—points toward a broader conspiracy. Phoenix’s higher-ups dispatch men to follow Nick and Lisa, and soon the couple finds possible links between the company and a planned terrorist strike on the U.S. Despite the protagonist’s white-collar profession (Nick opens the story having just finished auditing a shipping company’s books), Stam’s novel has a staggering amount of action. Nick and Lisa, for one, wind up in the midst of multiple gunfights. Suspense-laden plot points include a mysterious key Chuck leaves for Nick; baddies with the ability to sever communications (i.e., cellphones); and an unexpected ally for the investigating duo. The financial storyline sparks curiosity, especially narrator Nick’s thorough explanation of unfamiliar terms, like shorting stocks. It’s likewise refreshing that the nerdish Nick, an ex-Marine, is physically adept and funny (he left the Marines because his next promotion would make him Lt. Col. Sanders). It’s understandable that the final act focuses on deaths, near deaths, and dodging bullets—particularly with a potential bomb in the equation—but it’s unfortunate that it sidelines Nick’s brainy half. Stam drops in a few twists before the ending; some are predictable, others shocking, but none of them slows down the gleefully rapid pace.

Nick is an action fan’s dream, with the smarts and charm of an exemplary character who warrants a third installment of the series.