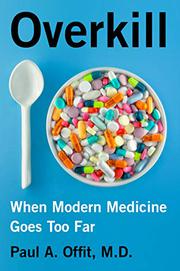 When Modern Medicine Goes Too Far

by Paul A. Offit

According to this expert skeptical account, there is less to many medical interventions than meets the eye.

Offit, a professor of pediatrics whose books include Pandora’s Lab: Seven Stories of Science Gone Wrong (2017), begins each chapter with the history of a belief or treatment and why it became popular, and then he describes the research showing why it’s ineffective and sometimes positively harmful. Regardless, too often, these remedies remain popular. Antibiotic eye drops rarely cure pinkeye. Antioxidants and vitamin E can contribute to cancer. Giving testosterone to older men doesn’t improve their sex lives but doubles the risk of a heart attack. Sunscreen doesn’t prevent skin cancer. Readers may be shocked to read that many studies designed to measure the efficacy of mammograms in preventing breast cancer deaths find no benefit. Other studies disagree, and this is an area of fierce debate. Offit writes that mammograms may save lives, but the effect is not as dramatic as once thought. The prostate specific antigen test measures a blood chemical sometimes elevated in prostate cancer but sometimes elevated for other reasons. Many experts agree with the author that it does more harm than good. Some worthless treatments are blasts from the past. As a cure for the common cold, Vitamin C peaked in the 1970s with Nobel Prize–winning Linus Pauling’s research. Today, enthusiasts still consider it miraculous, but it’s no more so than other vitamins. That teething causes fever is a Victorian belief that has achieved new life with the internet; ditto the conviction that amalgam dental fillings contain poison and should be replaced. Medical organizations such as the American Medical Association and the American Academy of Family Physicians discourage most of the practices that Offit condemns. Physician inertia often hinders their work, but so does patient demand. Most readers know that doctors dispense too many unnecessary antibiotics, but research has shown that “no…factor was as strongly associated with patient satisfaction as receipt of a prescription for an antibiotic.”

A valuable corrective text for our overmedicated nation.