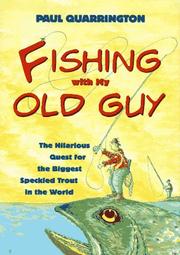 FISHING WITH MY OLD GUY

The Hilarious Quest for the Biggest Speckled Trout in the World

Novelist Quarrington (Whale Music, 1989) coaxes a wealth of bright humor from a couple of unlikely suspects: a fishless fishing trip and some really bad weather. Quarrington's fly fishing had hit one of those transitional moments when a guide was needed to facilitate passage to a higher plane, in this case mastering the double-haul cast. He became an acolyte at the feet of Gordon Deval, a magus and ``Old Guy'' who knew the secrets and was willing to share them—``Oh no, Grasshopper. Too much motion. The wrist must lock like a door against thieves.'' And in addition to the mysteries of casting, he was also willing to share the holiest of holies: the secret glory hole, where only lunkers lurk. It lay north, far north, in Quebec. For two weeks in August, Gordon and Quarrington and two others would form a balanced, equitable little society on an island in a lake that just might, Gordon had a feeling, surrender the biggest speckled trout in the world. The isle turned out to be something Dr. Moreau would have fancied: cruel wind, dark low skies, every prospect vile. The men were cold and wet and hungry, fetid and confused and angry because, of course, there were no fish there. During the extended lull, Quarrington's mind wandered, to tournament casting and casting clubs, to fishing for ``wyatt bias'' in Arkansas, to a rueful salmon encounter. There are times when the writing can get a tad wordy, as when the author probes distant autobiographical reaches; but before it gets oppressive, Quarrington is back in form, flashing drollery and wit, a big- hearted younger guy who understands the poetry of the double-haul, though the technique remains beyond him. If Quarrington is half as entertaining around a campfire as he is in this book, then he represents the Platonic ideal of the fishing buddy.