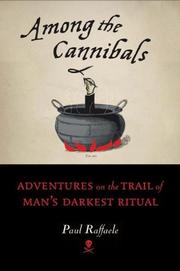 Adventures on the Trail of Man’s Darkest Ritual

Smithsonian writer Raffaele travels around the planet to study “the most repugnant and forbidding” violation of society’s taboos.

Unsurprisingly, the more exciting and disturbing places he visited were the ones where cannibalism was still an ongoing concern. In New Guinea, Raffaele journeyed far upriver to the Korowai, a Stone Age tribe whose belief in khakhua (malign spirits causing disease) obligated them to kill and eat purportedly khakhua-possessed tribemates. He found the Korowai a lovely people, actually, unlike the Aghoris, a creepy Hindu cult whose holy men fed on the remains of corpses that had been cremated and dumped in the Ganges. Raffaele’s narrative becomes truly horrific, though, when he describes venturing into northern Uganda, where rebel factions regularly kidnapped children, then forced them to kill and eat their compatriots. In the author’s portraits of rehabilitation camps holding hundreds of spiritually shattered children, his book reaches beyond adventure anthropology and achieves a tone of urgent humanity. Next to that, trips to Tonga (whose famously hefty islanders were once feared warrior-cannibals) and Mexico City (to examine the debate over whether the Aztecs were cannibals) seem like little more than sideshows. Raffaele isn’t afraid to toss himself into the mix here, hamming up the role of devil-may-care travel writer and citing his preference for “walking along the edge of every cliff I encounter in life.” This swashbuckling attitude makes for a swift read and some shallow thinking. “Eating human flesh, unless you have no prospect of other food and are starving to death, is an evil act,” the author writes at one point, “and no amount of religious mumbo jumbo can sanctify it”—true enough, but also blindingly self-evident; Raffaele himself refers to “the taboos placed upon [cannibalism] throughout much of human history.”

Not deep, but a dark thrill ride to the extremes of behavior.