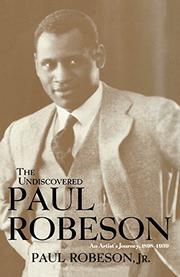 An intimate biography of Paul Robeson, written by his son.

Robeson Jr. (Paul Robeson Jr. Speaks to America, 1993) traces his father’s life from birth through the start of WWII, when the performer and activist all but fell mute. The author’s ranging voice can be defensive, proud, protective, and bell-clear, and while he may not have the thunderous delivery of his father, his words come across as heartfelt. The focus of his study is on the development of his father’s cultural and political views, while considerable attention is paid to the nature of Robeson’s relationship with his wife. Clearly, much of Robeson’s sense of dignity, self-worth, and justice came as a result of growing up the son of a clergyman (his father was pastor of Harlem’s Zion Church)—and from his own harsh experiences as the only black student at Rutgers. His drive to excel as a performer is set within the larger context of his conviction that the African-American cultural and spiritual experience was central to their liberation as a people. But this can hardly be considered late-breaking news—nor, as the author suggests, is the “debunking” of Robeson as a Communist likely to surprise many. While it is undeniable that Robeson admired the Soviet Union for its racial tolerance, as well as its anticolonial and antifascist stances, it now appears that he was more of a dupe than a true believer. Indeed, his silence on the Stalinist purges (to say nothing of the Scottsboro trials) would have made for some interesting speculation on Robeson Jr.’s part—and it is understandable, perhaps, but unfortunate all the same that such speculations never found their way into the author’s account. Robeson Jr. does, however, break some new ground in his discussion of his father’s artistic development, particularly regarding his use of the traditional folk style in spirituals.

Informed by a filial piety throughout, but hardly an unbiased take. (photographs, not seen)