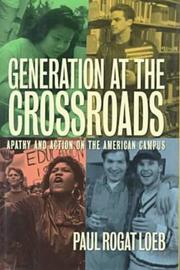 GENERATION AT THE CROSSROADS

Apathy and Action on the American Campus

An itinerant campus speaker reports back from interviews at more than 100 schools, arguing that students are not ``simply greedy or indifferent,'' as popular images suggest. Loeb (Nuclear Culture, 1982, etc.) covers a lot of ground, mixing report and essay. He begins by analyzing campus apathy: He meets apolitical students who prize individualism, call activists self-serving, fear downward mobility, lack historical perspective on the 1960s, and think their classroom life disengaged from reality. Loeb, a longtime activist himself, doesn't damn them but suggests that our larger culture encourages political complacency. He goes on, however, to explore activism, focusing on situations, not individuals. Some examples: ``Greeks for Peace'' at the University of Michigan, divestment efforts at Columbia, a tuition protest at the City University of New York. All of these efforts were launched by students inspired by a variety of stimuli: family, teachers, campus comrades, or a reaction to ``America's increasingly visible crises.'' Loeb concludes that this is a generation with a ``contingent'' future, in which small but growing numbers are trying to work for a better society. His own observations are generally astute, recognizing that today's black campus separatism has its historical precedent in the 1960s, criticizing PC-baiters but also acknowledging that identity politics privileges race and sex over class. However, he covers his ambitious topic broadly rather than deeply, failing to elucidate campus tensions over race and sex or to say much about curriculum reform—though he does observe trenchantly that the political activists he met were largely untouched by much-derided theories like deconstructionism and postmodernism. Better on big pictures than case studies, but a worthy response to Illiberal Education and other portrayals of campus life today. (First serial to Vogue, New Age, Sierra, Mother Jones; author tour)