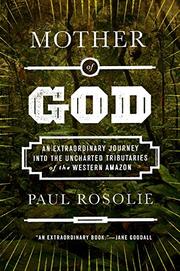 An Extraordinary Journey into the Uncharted Tributaries of the Western Amazon

In his first book, naturalist and explorer Rosolie chronicles his many thrilling experiences since 2006, when he first traveled to a research center located in a primordial jungle region of the Amazon basin, now threatened with unregulated development.

Now running Tamandua Expeditions to support conservation initiatives, the author was then an 18-year-old college student searching for volunteer opportunities to work with a conservation organization. During a college break, the author seized on an opportunity to spend a month at a jungle research center in southeast Peru, serving as an assistant in recording observations of the species inhabiting the area: spider monkeys, jaguars, crocodiles, a wide variety of snakes and more. This was the first of many trips to the center, which became his spiritual home. During his college years, he commuted back and forth from New Jersey to the Amazon; over time, he became an accomplished guide. Back home again, he worked to raise donations for the research center, which was a hand-to-mouth venture, and he also arranged ecotourism expeditions and volunteer groups to work at the center. Rosolie describes his deepening understanding of conservation and the issues involved in protecting natural ecosystems against would-be developers, loggers, mining interests and poachers. First and foremost, however, this is a gripping adventure story packed with plenty of adrenaline-filled encounters with massive snakes, intimidating jaguars and other creatures. On one occasion, the author was carried downriver while grasping the back of a gigantic anaconda “as thick as a small cow and easily well over twenty-five feet long…the mega-snake of legends.” As the author writes, “[a]dventure in its purest form is raw discovery. The draw to see what's around the next bend becomes hypnotizing; I was drawn forward by the powerful tide of the forest.”

A vividly written narrative of an amazingly diverse world still to be explored, whose destruction, as Rosolie wisely notes, would be a devastating loss for humanity.