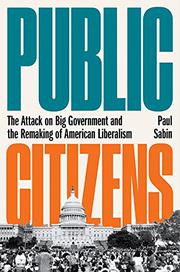 The Attack on Big Government and the Remaking of American Liberalism

A focused study of 1960s and ’70s American politics and the effects of the public interest liberalism that emerged.

Most histories of this period explain that the liberal heirs of the New Deal overwhelmingly supported government programs. This may be the popular view of events, but history professor Sabin, who directs the Yale Environmental Humanities Program, tells a different and disturbing story. Many readers only recall the vivid civil rights and anti-war campaigns of the era, but the author emphasizes equally influential—and liberal—movements that attacked government itself. He reminds us that Rachel Carson’s bombshell, Silent Spring (1962), blamed the massive damage caused by insecticides on dimwitted bureaucrats who were supposed to be “looking after things.” In the same vein, Jane Jacobs’ The Death and Life of Great American Cities (1961) attacked government planners who bulldozed vibrant neighborhoods in favor of immense, sterile landscapes. Sabin directs much of his attention to Ralph Nader, whose 1965 book, Unsafe at Any Speed, criticized government traffic safety agencies, entirely subservient to an auto industry that denied responsibility for injuries and deaths from accidents and proclaimed that driver education was the key to saving lives. Nader devoted the rest of his life to denouncing the government, becoming a major figure in the rise of public interest law. The Clean Air Act (1970) and Clean Water Act (1972) would have been weaker if Nader’s activists had not passed over Republicans and polluters and attacked liberal Democrats for their modest commitment. Stung, they denounced Nader but passed laws with more teeth. Despite approving these liberal movements, Sabin comes to the grim conclusion that “Nader and his fellow activists helped destroy a political economic system that served the working class” and “helped fuel a corrosive antigovernment legacy.” That may be a tough pill to swallow for progressive activists today, but the author’s cogent history is timely and likely to be enduring.

An insightful and squirm-inducing account of how the good guys won and then lost.