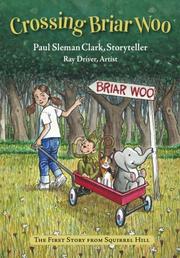 From the Squirrel Hill series, volume 1

In this children’s series opener, a girl embarks on an expedition with her cat and a (mostly) intrepid band of stuffed-animal friends.

Madison is a freckle-faced, daring young girl who lives in Squirrel Hill—not the Pittsburgh neighborhood but a bucolic rural area with a farmhouse bordered by Briar Woo, a small forest with a stream running through it. (The forest’s curious name is never explained, perhaps deriving from a child’s pronunciation of Briar Woods.) Madison’s companions include a cat named Kitty, who claims not to be curious but is, and two live stuffed animals who speak. Ellie the elephant, fat and fearful, makes up enjoyable songs; Sergeant Monk-Monk is well-organized and resembles Madison’s Uncle Stanley, a soldier. Uncle Stanley bought Monk-Monk in North Africa—which, Madison is sure, lies on the other side of Briar Woo and is the object of today’s trek. The foursome encounters some problems, especially in crossing the creek that runs through the woods; Ellie, in particular, has some scary moments but prevails, and the companions befriend a beaver. Madison is dismayed to discover that after all their exploring, they will arrive where they started, but she praises her friends for doing well. North Africa can wait for another day. Clark (Just an Ordinary Elephant and the Bald Cardinal, 2018, etc.) owes an obvious debt to A.A. Milne’s Winnie-the-Pooh books, with the woods, a young child protagonist, and a cast of plush-toy–derived characters. Like Pooh, Ellie creates whimsical ditties; like Eeyore, he's pessimistic: “We do not know how far it is…and my short, fat legs cannot move very fast.” Clark does add a North American flavor to the story (aimed at ages 4 to 7) with the farmhouse setting, gopher and beaver characters, and general air of can-do resolve. It’s odd, though, that the dialogue sometimes sounds British: “Bosh,” “Terribly sorry,” and “Listen, old chap,” for example. Driver’s (Just an Ordinary Elephant and the Bald Cardinal, 2018) skillfully drawn, attractive illustrations deftly capture personalities, providing rich details that help tell the story.

With its flaws more likely to bother adults than children, this tale delivers an enjoyable adventure for reading aloud.