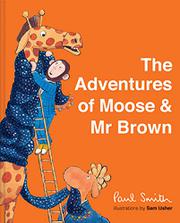 THE ADVENTURES OF MOOSE & MR. BROWN

Anthropomorphic animals meet through happenstance, become friends, and help each other with their problems.

The new spin this title tries to apply to the overly familiar trope is that one of the two characters—monkey Mr. Brown—is a famous fashion designer. He meets Moose on a plane when Moose is traveling from Alaska to London. Moose is introduced as having a superfluous and perpetually absent-minded twin—Monty—who has boarded the wrong plane. Mr. Brown offers to help Moose look for Monty, though looking seems to just mean that Moose will accompany Mr. Brown as he travels around the world to work. Moose, in return, provides Mr. Brown with top-notch fashion ideas, such as scarves for giraffes and sunglasses for snakes. Though clearly aiming for some degree of lovable kitsch, this title overshoots and lands squarely on bizarre. The premise is preposterous; the narrative meandering. At best the choice to feature an anthropomorphic (possibly stuffed) monkey character named “Mr. Brown” is unfortunate; at worst, it’s offensive—especially taken alongside the tiny vignette that is the sole representation of Africa. The illustrations are frequently too crowded, making decoding them difficult and rendering the entire work a confusing mess.

Safe to skip it.