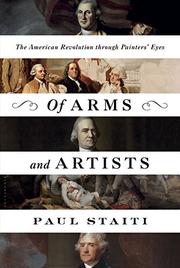 OF ARMS AND ARTISTS

The American Revolution Through Painters' Eyes

This is an impressive, ambitious undertaking, to tell the stories of five painters—Charles Willson Peale, John Singleton Copley, John Trumbull, Benjamin West, and Gilbert Stuart—while simultaneously showing how they were all interrelated and doing this against the complex history of the American Revolution. Staiti (Fine Arts/Mount Holyoke Coll.; Samuel F.B. Morse, 1990, etc.) begins his intricate narrative in January 1779. While the war waged, the Continental Congress approved funds to have Peale create a life-size portrait of “His Excellency General” George Washington. They felt strongly that art was “capable of arousing potent emotions in times of intense political change.” Staiti shows how these painters’ works “illuminated the era” when the population was in desperate need of inspiring images, rituals, and myths. Peele would go on to paint more than 100 more portraits. Copley, the “greatest painter in colonial America” and a loyalist, made many such contributions as well, until he felt he had to flee to London to protect himself and his family. West, known in England as the “American Raphael,” was born in Pennsylvania and served for more than a decade as King George III’s court painter. Peale and other Americans were students of his. He had to wait until he could express his patriotic sentiments in paintings, and his “luscious” painting of the Paris peace treaty signing was never completed. Trumbull, nearly blind in his left eye, served as Washington’s aide-de-camp and painted memorable battle scenes. His magnum opus is the majestic Declaration of Independence. Impulsive, witty, profane, and manic, Stuart, writes the author, was the “most talented of them all.” His numerous portraits of the Founders were conceived with a “brilliant talent never before seen in America.” Throughout, Staiti provides insightful, in-depth discussions of many key paintings, and the book is lavishly illustrated with illustrations and color plates.

A lively, splendid history that captures the times with insight, acumen, and a juggler’s finesse.