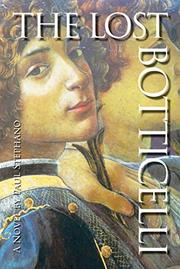 As an art curator gets close to finally proving the existence of a long-lost painting, he must fend off accusations of theft and a greedy, dangerous man in Stephano’s debut historical mystery.

Daniel Bradley, curator at the Pitman Art Museum, is traveling to Italy as courier for the Donatello’s Christus, a $50-million statue being loaned for a Donatello exhibit. Daniel is also meeting with his old art history professor, Paolo Bertolini, who relays shocking news—two German brothers claim to have a tondo (circular painting) from Botticelli, one that Daniel, who’d written a book on the artist, surmised was lost more than 500 years ago. But Daniel’s troubles have already started: The Christus is gone from its crate upon arrival in Milan, replaced by a cheap bronze statue, and someone may be framing him for the hefty loss. His situation worsens when Werner, one of the brothers, who’s incurred gambling debts, enters the picture. Werner wants to sell the Botticelli painting for personal gain, and that means threatening Daniel, Paolo and art restorer (and Daniel’s old flame) Laura to expedite the authentication process. The novel brims with art history, including details of Botticelli’s past, and hops back in time to the late 15th century, prior to the tondo’s creation, and its history beyond the artist’s death. But the rich historical background never overwhelms the story, thanks to a remarkable mystery, including damning evidence found on Daniel’s computer; comic relief from Daniel’s cynical and flamboyant friend (and fellow art curator) Jeremy; and a startling death, as well as a kidnapping. Pictures of Botticelli’s art are inserted into the book, which should help readers visualize or remember his paintings. Similarly, Daniel’s metaphors are appropriately (and amusingly) art-inspired; some may be lost on the average reader, but most are literarily visual: Sleep eludes Daniel “like a nymph fleeing a satyr in a Renaissance painting.” The novel’s latter pages are noticeably more intense; thugs are actively looking for Daniel and others, and Stephano neatly resolves both the Christus and Botticelli storylines. There are elements, however, left open; Daniel’s relationship with his minister brother, given only a few details, begs for a sequel, while the unsettling ending stands on its own.

Art history buffs will be elated with this gem, but the bold prose and devotion to the genre is all-inclusive.