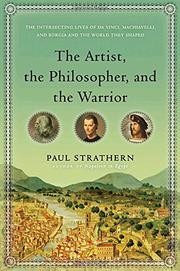 THE ARTIST, THE PHILOSOPHER, AND THE WARRIOR

The Intersecting Lives of Da Vinci, Machiavelli, and Borgia and the World They Shaped

Historian Strathern (Napoleon in Egypt, 2008, etc.) explores the decisive influence of a ruthless Renaissance prince on both a diplomat and an artist.

Amid the shifting alliances and vulnerable kingdoms of 15th-century Italy, Cesare Borgia (1475–1507), the illegitimate son of Pope Alexander VI, assumed unchecked power at a young age when his father put him at the head of the warring papal forces. Aided by the invading army of France’s Louis XII, Borgia was urged by his father to carve out his own power base in Romagna, and by 1500 he had duly subdued it, along with Urbino and other city states. Florence bordered this region and was essentially defenseless, so able negotiator Niccolò Machiavelli was sent as part of a three-man delegation to press for Florence’s protection. Up close, Machiavelli could observe this exemplary warrior, known for his treachery, depravity and brilliance, and the diplomat later made Borgia the subject of The Prince. As part of his effort to appease the rapacious ruler, Machiavelli offered the services of Florentine native Leonardo da Vinci, an expert military engineer as well as celebrated painter and designer. During the next eight months, da Vinci toured Borgia’s fortifications and suggested improvements, as evidenced by the notebook sketches reproduced here. At the same time, the artist/humanist was digesting the moral ramifications of aiding Borgia’s military engine and finding them deeply repugnant. Meanwhile, Machiavelli was using the experience derived from diplomatic duties in the service of purely self-interested rulers like Borgia to set forth a new “science” of statecraft. Both artist and philosopher were irreparably marked by personal contact with “humanity’s evil nature,” argues Strathern in this rigorous and scholarly yet readable study of the confluence of three major Renaissance figures.

Accessible and impressive in scope.