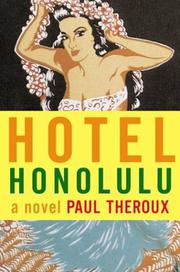 “We’re multistory,” explains Buddy Hamstra, owner of the Hotel Honolulu, describing in a word not only the setting but the narrative structure of Theroux’s tale of a burned-out, middle-aged writer seeking salvation at the edge of paradise.

In the frame tale, profane, effusive Buddy, as pleased to be able to say that his manager wrote a book as he is to retire to his mansion, drink recklessly, and screw his masseuse, hires the nameless narrator to run his down-at- heels hotel. The manager, meantime, seduces Sweetie, daughter of the hotel’s resident prostitute, Puamana Wilson, who bore Ku‘uipo—Hawaiian for “sweetheart”—27 years ago after a brief encounter with a mainlander reputed to be JFK. When Sweetie gets pregnant, the manager marries her. (Condoms seem unknown in fecund Hawaii, where couples routinely engage in unprotected sex until they produce exactly one child.) Leaving the management of the hotel to his capable staff, he then settles down contentedly with his pretty, semiliterate wife and his precocious daughter Rose to watch his guests, whose stories burst forth like seeds from an overripe papaya. We meet Hobart Flail, eternal pessimist, whose doomsaying keeps ringing true; poisonous Madam Ma, whose flagrant attention-seeking takes a fatal turn; Jasmine the hooker, whose men pay her to leave; and socialite Mrs. Bunny Arkle, whose men pay her to stay. Eight-year-old Rose sagely reminds us that, while all happy stories are the same, unhappy stories are all different. So death is a frequent theme, as is incest—Puamana is raped by her father, Buddy’s wife Pinky by her uncle, and Mahina, an adopted daughter in search of her real father, is inevitably molested by him. What to make, then, of the narrator’s paternal fascination with Rose?

If you can get past the false modesty of the narrator, whose allusions to his discarded fame only make him sound smug, there’s wonder on every floor of the Hotel Honolulu.