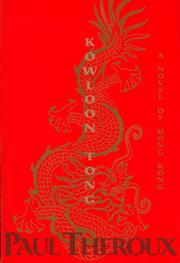 The prolific author of, most recently, My Other Life (1996), and many other works set in faraway places, returns to one of his favorite locales—the Far East—in this tense novel about disenchanted Caucasians living in Hong Kong on the eve of that former colony's separation from Britain and its reunification with China. Neville ``Bunt'' Mullard and his mother Betty reside in the eponymous city of Kowloon Tong and continue to run the textile factory (Imperial Stitching) cofounded by Bunt's late father. Betty subsists on bittersweet memories of her husband's business acumen and compulsive philandering, and Bunt fills his lonely nights with furtive visits to the city's semi-notorious ``chicken houses.'' Both feel in their element in this rigorously stratified society: ``They had been liberated by Hong Kong, they had money and a sense of the exotic, they were superior here.'' As the ``Hand-over'' draws near, the influence of Chinese military and business interests becomes oppressive—specifically, for the beleaguered Bunt, in the person of the enigmatic Mr. Hung, who at first politely offers, and soon thereafter demands, to buy Imperial Stitching. Eventually capitulating, the embittered Bunt undergoes the erosion of his self-confidence, the loss of the local girl he had hoped to marry (she's one of several people who mysteriously ``disappear'' ), and a final humiliation at the scene of his factory's demolition—a scene that Theroux caps with a stunning final image. This hybrid story is infused with a powerful sense of menace (and an unfortunate whiff of racism) and manages a doggedly convincing characterization of its complex protagonist. But there are several long stretches during which nothing much happens, and Theroux overindulges a penchant for lengthy summaries in place of developed scenes. As a result, the book feels uneven, and sometimes hurried. A strongly imagined melodrama with a lot on its mind, but not the novel it might have been.