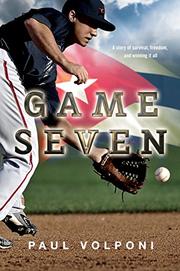 Sixteen-year-old Julio Ramirez Jr. dreams of being a junior Nacional and playing for Cuba against the best young players around the world.

Baseball is “practically a religion” in Cuba, and Julio’s father was like a Cuban god, an all-star pitcher for the Cuban National Team. Now, having defected, he’s a star for the Miami Marlins. But instead of pride, Julio feels resentment toward his father for abandoning his family to a life of poverty while he, the great El Fuego, lives the high life in Miami with his multimillion-dollar contract. Moreover, Julio’s baseball dreams may not come true: How can he be trusted to leave the country when his father defected; won’t he do the same? So Julio defects too, and in a tense and slightly comic scene, he drives to Florida in a green ’59 Buick that’s been converted into a boat. Julio’s reconciliation with his father is handled deftly in its poignant awkwardness, and baseball action is appropriately exciting, though the notion that Julio is allowed to hang out with his father during Game 7 of the World Series is seriously implausible. Volponi wisely shies away from a tidy, inspirational ending but does leave room for hope for reconciliation.

An entertaining tale of baseball, family and loyalty.