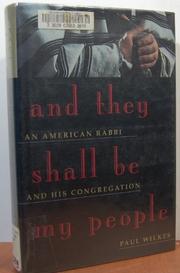 AND THEY SHALL BE MY PEOPLE

An American Rabbi and His Congregation

Sometimes perceptive scenes from the life of a rabbi, as observed through the eyes of a Catholic journalist. Both uneasy hybrids, rabbi and book seek the spiritual but often bog down in the mundane. Wilkes, whose In Mysterious Ways (1990) profiled a parish priest who was stricken with cancer, here attaches himself to Jay Rosenbaum, the 42-year-old rabbi of a midsize Conservative synagogue in Worcester, Mass., who is himself the son of a pulpit rabbi. How does a rabbi stem the Jewish tide of assimilation and indifference in a society where his people have succeeded beyond their wildest dreams? Wilkes has remarkable access to Rosenbaum's long days—not all parts of which are so interesting for a man who is both the synagogue's spiritual leader and chief bottle washer- -and we are privy to the rabbi as he counsels noncongregants who want to raise their baby as a Jew even though the expectant mother has no desire to convert to Judaism; leads an acculturation class for Russian immigrants, where sometimes only one or two pupils show up; officiates at a ritual circumcision of the son of marginally observant Jews; visits a congregant who is dying of Alzheimer's; hustles to get congregants to join a trip to Israel that he's leading; tells a tale about a Hebrew-speaking parakeet to the Jewish day school's nursery school class; and haggles with the synagogue's board of directors over a new contract. Several congregants confide to Wilkes that the rabbi is unknowable; to the reader he appears under-appreciated, very caring and very frustrated, but also naive and presumptuous in his desire to make his congregants observant Jews. His wife, overweight and depressed, briefly confides her unhappiness with never seeing her husband; more from this insightful rebbitzen would have been welcome. Wilkes follows the rabbi on the congregational tour of Israel, but it's a choppy, pretty banal travelogue. Also annoying is his sometimes wide-eyed appreciation of his subject as evinced by his references to Rosenbaum as a Moses and as the person charged with the care of his congregants' souls. More respectful reportage than rigorous analysis, Wilkes's latest effort begs the question: If, as statistics proffered here suggest, two-thirds of American Jews today are not affiliated with a synagogue, who's going to buy a book on the nuts and bolts of a rabbi's world?