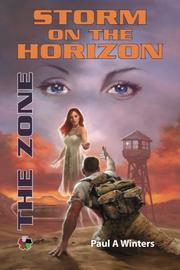 STORM ON THE HORIZON

by Paul A Winters

This charged sci-fi debut finds the U.S. military desperate to outmaneuver a strange, violent force of alien invaders in the American Southwest.

In 2033, Eileen and her husband, U.S. Army Capt. Lucas “Hopper” Phillips, are driving back to Fort Bliss, near the border of Texas and New Mexico. It’s their fifth wedding anniversary, and they’ve parked near the bank of a creek to share a tender moment. Suddenly, a shock wave rolls across the desert, throwing their car into the creek; Phillips escapes alive, but Eileen doesn’t. It turns out that the shock wave came from an explosion in New Mexico that destroyed more than 120 square kilometers and killed an estimated 30,000 people. The blast area is soon engulfed by raging storms that come and go with odd regularity. From a command center under Fort Bliss, Gen. Shadley Pierce starts aiming soldiers and weaponry at this troubling “Zone,” where no radio communication is possible—only for invisible alien forces to destroy them. When Operation Hail Mary launches to capture an alien and glean details about their technology, the grieving Phillips is part of it. With the miraculous help of a telepath named Dell Thompson, Phillips survives and succeeds. But the alien detainee, Reckston, eventually proves that all of the military’s assumptions about the Zone are false. Winters, in his debut, whips up strong, swift, imaginative currents that are tough to resist. Densely plotted scenes stitch together nicely, offering alternative perspectives on major events. His entertaining characters are also psychologically intriguing; President Andrew Wellington, for example, reveals that he wants a military victory in the Zone because he believes it will help him get re-elected for a third term. Winters loves futuristic gadgetry, and employs many great ideas, such as BRAVE, “short for Biometric Rhythm Adapting Vector Enhancer,” which “enhance[s] how someone thinks and feels.” Occasional typos mar the flow at times (“Fill free to answer any questions”). However, the dialogue, right to the end, is fantastic, as when the maniacal Gen. Pierce says, “World peace is just around the corner.”

A sleek sci-fi novel packed to the brim with rewarding surprises.