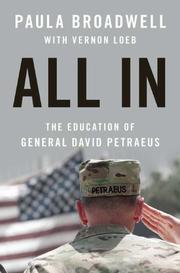 The Education of General David Petraeus

A semi-authorized biography of Army Gen. David Petraeus, in the context of his Iraq and Afghanistan war commands after 9/11.

While researching her doctorate at the University of London, Broadwell, a graduate of the U.S. Military Academy, decided to focus on Petraeus. She had met him in 2006, while a graduate student at Harvard University's Kennedy School of Government, and she eventually came to know him better and won his cooperation to produce a book. Washington Post editor Loeb, who was embedded with a military unit under Petraeus' command in Iraq in 2003, provides a solid journalistic aspect to the book, which is not a traditional biography—the narrative is not chronological and does not cover every aspect of the subject’s rise from student to the top of the military establishment. The author scatters biographical elements throughout the story, offering a somewhat in-depth understanding of how generals are made in the contemporary American military, and what drove this one man in particular to attain the top rank and become perhaps the most recognizable war commander since Dwight D. Eisenhower. Although Broadwell rarely demonstrates overt political stances in the book, she appears to more or less approve of the invasions of Iraq and Afghanistan as a counterterrorist strategy. Though Petraeus comes across as a consistently “all-in” warrior, Broadwell occasionally includes material that reveals his flaws. To the author's credit, she pays close attention to Petraeus' home life; after all, no war commander leaves for battle without consequences for a spouse, children, parents and many others. It is of special interest that Petraeus married Holly Knowlton, whose father William A. Knowlton served as superintendent of West Point when Petraeus was a cadet there. The narrative is difficult to track because of shifting time elements and sporadic sections of battleground details, but Broadwell provides a first-rate education about the modern American military for outsiders.