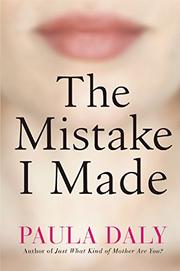 THE MISTAKE I MADE

A woman strikes a deal with a very rich lover and lives to regret it.

Roz Toovey, a divorced physiotherapist, stands on the verge of losing everything she has. She’s deep in debt and has no idea where she’ll get the money to pay her bills. When bailiffs show up and take everything from her place but the kitchen sink, Roz and her little boy, George, contemplate a bleak future. Enter the wealthy Scott Elias. A friend of Roz’s sister and brother-in-law, Scott has a picture-perfect marriage to Nadine. The golden couple jet-set around and hold expensive parties, but Scott doesn’t care about all that. He wants Roz, and he’s willing to pay for the experience. Scott offers Roz a ridiculous amount of money to have sex with him—no strings attached—and Roz, desperate to keep a roof over her head, takes him up on it. But there’s a catch: Wayne, Roz’s boss at the clinic where she works, has found some money missing, and, having figured out her arrangement with Scott, he wants part of the action or he'll pin the theft on her. Roz meets him at his place and agrees to a one-time sexual encounter, but things go awry, and when she gets to work on Monday, Wayne is missing. Then Roz is left to figure out how much the police know about her, as well as deal with Scott’s increasing demands. Daly’s stories are always compelling but rarely plausible, and this one’s no exception. This time she includes too much detail about physiotherapy (providing, for example, a detailed explanation of sciatica, even though the condition is immaterial to the story) and creates a highly flawed and morally compromised protagonist, making it difficult to empathize with her. Although it takes too long to get the narrative ball rolling, Daly heats things up fast from there.

A slow start, hypnotic storyline, and overly neat ending make this not one of Daly’s best.