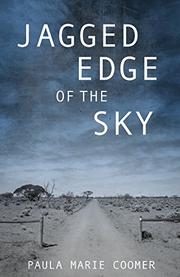 Jagged Edge of the Sky

Coomer’s (Dove Creek, 2010, etc.) second novel tracks the impact of an Australian lothario on two families, one Australian and the other American.

The story begins in the Australian Outback in the 1950s, where Edmonds Tuor and his wife, Cherise Marie, operate a caravan camp. Next door are Russell and Jeanne McMurtrey, Americans who’ve brought their two children to caravan through Australia on an educational journey. With the McCurtreys is a local hire, Rich Hand, a “road assistant and tour guide.” Rich has “Hair black like an oyster” and “Cobalt eyes,” which is evidently an irresistible combination, as both Cherise and Jeanne are separately swept away by his animal magnetism. The affairs result in both women getting pregnant. The McMurtreys return home to San Diego, where their new son, Dale, is born, and Cherise gives birth to Martin, her third child, in Australia. Martin eventually moves to America, and the second half of the novel follows him to Idaho, where he’s an on-again, off-again mental health patient. Much like his older brother, Piotr, who has “night terrors,” Martin suffers from “seizures” and hallucinations, which are depicted in harrowing detail. Coomer has woven an intriguing, complicated tale filled with so many characters that readers will need a score card to keep them all straight. Almost everyone has ties to everyone else in one way or another, in locations from Australia to America and through the decades of the second half of the 20th century. A few more signposts would have been useful; instead, readers will have to ferret out the revolving time frames from scant clues. Although the narrative is heavily character-driven, it’s also defined by its attention to local vernacular, its vivid imagery of the unforgivingly arid Outback, and its focus on the challenges faced by a unique assortment of people who have chosen to call it home. Overall, it’s a frustrating yet engrossing read that leaves readers pondering where the story might go next.

A lusty, tragic tale for readers who are willing to work for its satisfying moments of connection.