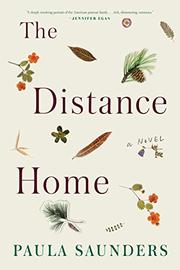 The slow, punitive grind of family dynamics, even when leavened by love, contorts a Midwestern family.

Where does all the hurt and anger go, wonders René, the lively, confident middle child, about her sad, victimized brother, Leon. Saunders’ debut makes no bones about the answer to that question, illustrating in detail the sedimentary process of psychological damage inflicted on children by their parents, in this case Al and Eve. Married young in Fort Pierre, South Dakota, the couple settles, at first, in Al’s parents’ basement, Eve working two jobs, Al—a cattle trader—often away on the road. Soon they have two children, Leon and René, later a third, Jayne, and money is tight. Set in the 1960s, the novel’s world is remote and traditional, at least as represented by Al, whose pitiless response to his son’s sensitivities—a stutter; a startling gift for ballet dancing—is knee-jerk harshness. Leon reacts by pulling out his hair and eyelashes and withdrawing from the family group, while Eve’s attempts to defend him only result in arguments with her husband. Saunders avoids Leon’s perspective, opting for René’s instead. She too is warped by the constant tensions at home, becoming an overachiever whose will to excel leads to resentment and social rejection. Meanwhile, there’s no respite for poor Leon, beaten by his father, assaulted by a stranger, and later sent to an abusive Catholic boarding school. Flashes forward confirm the inexorable outcome: Leon’s future will be alcoholism, drugs, mental disease, and PTSD. René manages to escape, and Saunders suggests some healing balm in years to come, but not enough to displace the early, indelible harm.

A grim, haunting parable of split child-rearing in which the dark blots out much of the light.